Today was very peaceful.  Though overcast and occasionally drizzling, there was but little wind.  Thus the river was placid and flat.  It is a clear indication of what chaos the wind causes on the surface.  I had breakfast in New Madrid and filled my water vessels using a helpful local resident’s hose. 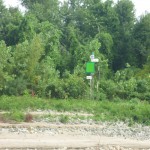 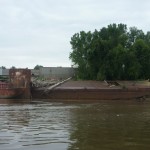 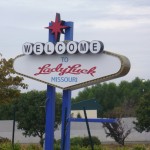 On the boat ramp was a tow worker, awaiting the john boat which would bear him off to an approaching tow.  He works 28 days, then has 28 days off.  His wife and two small girls accompanied him to bid farewell.  As it is now post-harvest, he informed me I can expect to see an increasing number of barges on the river, bearing grain to points south.

New Madrid lies at the apex of an impressively long curve in the river.  This 20-mile stretch of hairpin could be bypassed by a mere one-mile portage.  It can only be assumed that with enough time the river will figure this out and cut its way through, stranding New Madrid some eight miles from the water.  Such events occur regularly, as Twain noted in his “Life on the Mississippi.”  The river is shorter every year.   I believe it is now 200 miles less than during his time.  Many years ago, in the wake of a massive earthquake, the river was said to have run backwards at New Madrid.

Saw the largest barge configuration yet, a mighty seven by seven.  Stopped for a break on an enormous sandbar, which felt like a deserted island.  Kentucky has already come and gone in two days, and I was now on Tennessee soil—the seventh state I have visited on this voyage.   Arrived in Caruthersville around 5pm, where I was able to indulge in my belated birthday feast and lodging.