Awoke much refreshed and invigorated at 6 am and was on the water by 6:45.  Yesterday was exceedingly blustery and would have been most unpleasant on the river.  Thankfully, today was quite calm.  Again, very chilly in the morning and did not warm until 10 am or so.  The current nice and swift, and my body energized by the day of rest, I made excellent time.  Paused for lunch on a sandbar.  The first time it’s been fair enough to not seek shade for my break. 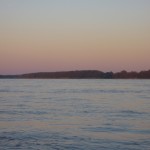 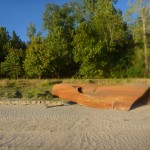 This afternoon I passed what seemed to be multiple mouths in Red River, each controlled by a lock.  From my charts I infer that sometimes the river flows into the Mississippi, sometimes out.  I believe this to be yet another example of the Corps of Engineers attempts to control the river, to insure that she runs her course to the Gulf, past Baton Rouge and New Orleans, without seeking an alternate route.  The size and scope of the exertions to tame this river, from the locks and dams, to the levees, and revetments, must surely place the Corps’ efforts amongst the greatest engineering projects in the history of man.  I would be curious to see a comparison between the Great Wall of China, the Pyramids of Giza, and this river—in terms of earth moved, dollars spent, man-hours of labor, volume of rock, etc…

Later I stopped alongside a tug, hove to on the bank, in hopes of being allowed aboard for an inspection of the facilities.  Passing these hulks all day long, I should very much like to compare the reality of their interiors to the images I’ve created in my mind.  Alas, I was politely rebuffed on orders of the captain on liability grounds.  I will continue to inquire when opportunity presents itself, as it would seem a shame to travel so far and never know what life is like aboard these craft.

Today I passed the 2,000-mile mark.  A very satisfying feeling to be sure.  It’s hard to comprehend such a distance, traveled solely under one’s own power, despite the fact that I have lived it every day for these many weeks.  I also passed out of Mississippi; the remainder of my travels will be solely within the state of Louisiana.  The river has served as the division between two states ever since Red Bluff, or thereabout.

Final note: I passed the ferry to Angola Prison at day’s end.  A rather old and notorious place, though at this time I cannot remember the details of its history.  I do recall it to have been the home of Leadbelly, who was recorded there by the Lomaxes, and eventually granted early release to pursue a folk and blues career as far away as New York City.