Enjoyed a warm and peaceful night’s sleep last night, courtesy of a half-buried rusty cargo container in the sands of the beach on which I was encamped.  It was a long riveted cylinder, laid on its side and buried so as to create a long hollow semicircular tube.  It afforded me perfect shelter from the wind and I slept quite soundly. 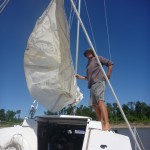 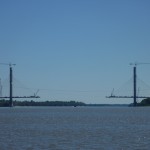 Meet Me in the Middle! 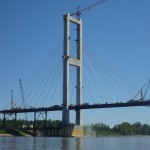 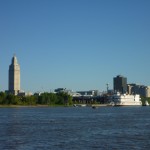 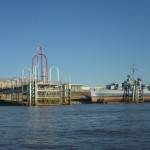 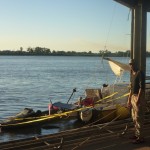 Moored for the Night 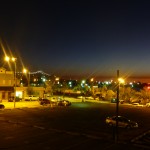 After traveling half the day, I came upon my sailing acquaintance from Vicksburg, the earnest and genial half of the two and not the instigator of the melee of days past.  I came aboard his 21’ sloop for lunch and enjoyed his company immensely.  I remained with him for the remainder of the day, under sail when the winds were favorable, or on motor power when not—my kayak bobbing merrily along behind.

We moored in Baton Rouge alongside a coiling and tubular public dock/river-viewing platform that seemed more a work of modern art than functional facility.  Indeed it was gated off from the public and in a great state of disrepair.  It sat in the shadow of the USS Kidd, a decommissioned WWII destroyer, whose curator had given us permission to dock for the night.  Baton Rouge seemed to possess a great many and varied public spaces along its waterfront and civic center, which we enjoyed exploring as the sun went down.  We then made a tour of the drinking establishments downtown and did not return to the boat until nearly midnight–our appetites and thirsts happily sated.

I slept on his boat, in the cockpit, where I was nicely sheltered from the cool winds.  I was rudely awakened, however, by waves splashing over me several times from barge wakes, which was unpleasant.  It has been in the 40s each night for some time now.