I have arrived! My long sought goal achieved! I lack for words to describe the satisfaction and joy.  Very eager and excited all day, I pushed on without pause, eating my lunch aboard the kayak so as not

to lose time.  The river was choked with traffic—tugs, tankers, and all manner of other boats servicing them.  Great masses of empty barges, five to ten wide and twice as deep, frequently lined the shores.  Many tankers lie anchored on the banks and I passed so near to them as to exchange pleasantries with the Filipinos on deck, towering many stories above me. 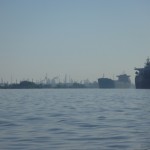 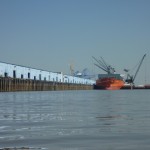 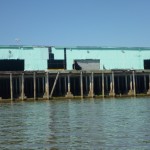 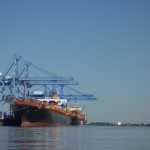 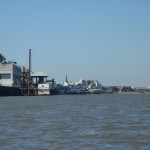 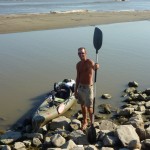 Every bend brought me closer, and I crossed the channel numerous times in my eagerness.  By now the mass of traffic on the river was as unthreatening as busses are to a motorist.  Quite a change from my first apprehensive encounter with a barge-laden tug in St. Paul!

At last I passed a naval yard where some manner of giant war ship was being fabricated, and then passed under the interstate.  The skyline of New Orleans was now very visible and the river bent south and ran along a park where multitudes enjoyed picnics or read or played about in the sun.  Now in the home stretch, the river bent back east and I entered the Port where stevedores were busy at work loading freight into massive tankers.  Adding to my excitement and joy was the seemingly special attention I received as I paddled through the port.  Tugs would toot a deep horn blast as I passed, and some would joke with me over their bullhorn.  A man in a giant crane loading some kind of grain gave a friendly honk and a wave, and several truckers delivering goods along the wharf did the same.  It made me to feel as though they had all been waiting to cheer me on.

As the river bent north to begin the crescent shape from which the city takes it nickname, I could at last behold with my own eyes the final destination! The Canal Street/Algiers ferry was just departing and I crossed its wake and saw ahead a flight of stone steps descending to the water.  As the hull slid to rest on the sandy shore, I leapt out onto the bank with a triumphant whoop.  At the head of the stairs some sort of toothless ex-con was playing harmonica and singing, well into his cups.  Such was my glee at arriving that I sprung up the stairs and began to hoot and holler, stamping my bare feet and clapping my hands, dancing to his music.  When I informed him of the distance I’d traveled, he was suitably impressed enough to make an announcement on his microphone to the tourists and other folks strolling along the levee.  Soon a sizeable crowd had gathered to observe the commotion and the silly stranger, sun-baked and wearing naught but dirty shorts, who was hopping around and yelping with delight.  I received many hearty congratulations and posed for many photos.  A more satisfying and rousing arrival committee I could not have asked for.

New Orleans is an incredible city, perhaps the greatest I have ever visited.  In the days to come I know I will eat well, drink deeply, dance the night away, and be merry.  But those tales will lie in a different journal, for now my journey is complete.  I will sleep in bliss tonight!  Nothing compares to the satisfaction of a goal boldly conceived, diligently planned, strenuously executed, and triumphantly realized. 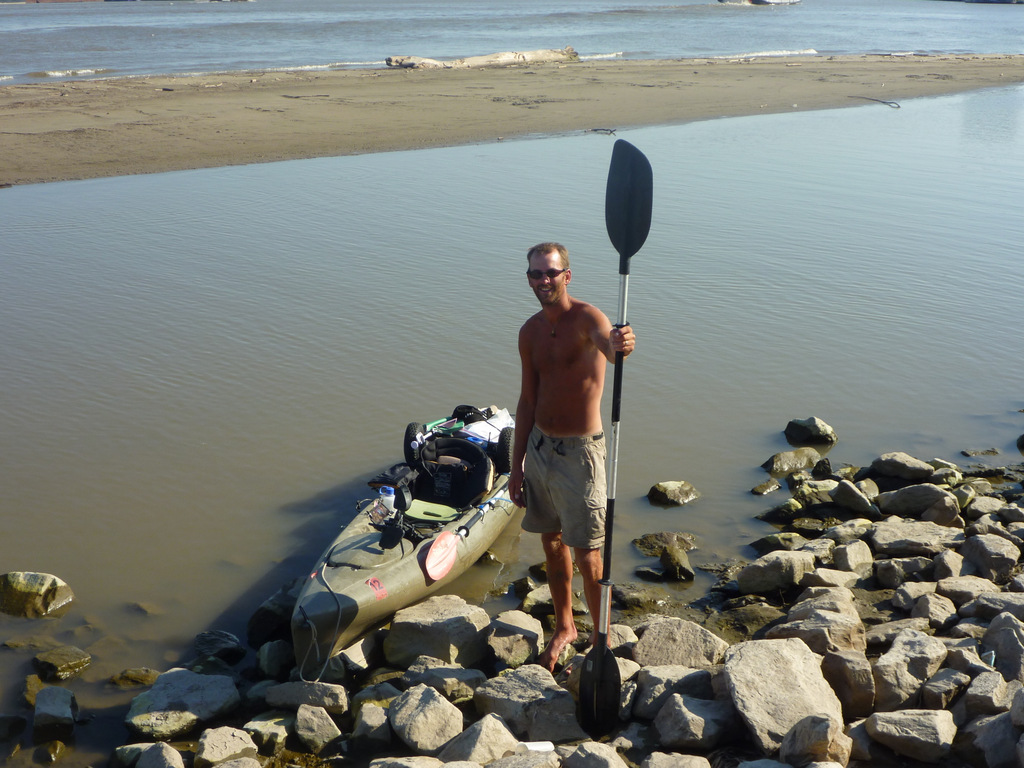