Was awakened with the news that my two sailing acquaintances, who had departed yesterday morning, had fallen to blows for reasons unknown.  A machete allegedly brandished, and its wielder beaten back.  He was in the local hospital receiving treatment and looking for assistance.  I had planned on overtaking this pair and perhaps camping with them, but I now believe I shall avoid such volatile individuals and remain alone on the river. 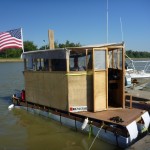 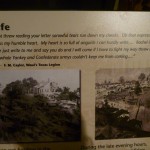 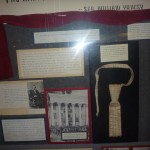 Today I rode up to the battlefield memorial and learned of the campaign.  I feel very melancholy when pondering fellow citizens laying siege to their kinsmen and reducing the populace to starvation and illness.  Within the park were various impressive monuments erected by each state to her soldiers.  The most striking was the Illinois monument, built in the style of a classical domed temple.  The reverberations within were cathedral-like, and as I was alone I indulged in a few songs and relished the ghostly decay of the echoes.  I also visited the city history museum, housed in the stately old courthouse where Jefferson Davis made his first speech.  There were many artifacts and histories pertaining to him within, as well as to bygone eras of this region.  One object of note was an elegant red sash worn by Davis on his inauguration—previously worn by George Washington for that same occasion.

There was a good deal of information on life during the siege—including the last dispatch from the town newspaper prior to surrender.  Paper was so scarce that it was printed on the back of wallpaper.  Union forces had occupied the town as the type had been set but was yet unprinted.  Thus they added their own final paragraph to the edition, detailing their entry into the city and ran several copies for history’s sake.

My spare parts have arrived, and I completed repairs on my boat, the last such actions I dearly hope!

I have purchased enough provisions to last me to New Orleans, though I imagine I will have further opportunities in Louisiana.  This town, like so many I have encountered, is full of warm people.  I shared a few beers with the local undertaker down at the wharf as the sun set.  He is the only person who bid me farewell with the hope that he doesn’t see me again!