Spent the bulk of the day exploring the environs on a borrowed bicycle—an excellent method of exploration.  Vicksburg was once situated on a long and mighty bend of the river, with a bustling riverfront; it was made very wealthy by the cotton grown in the Delta.  Many years back the town awoke to find the river had shifted the channel overnight and the wharf was left dry.  Early in the 20th Century, an operation was begun to re-route the Yazoo River to flow through this dry channel, once again providing a useful riverfront.  Though the water is now lined with barges and riverboat casinos, the interior of the town is very picturesque and contains many of the charms of yesteryear.  Dilapidated shotgun shacks co-exist with marvelous stately mansions. 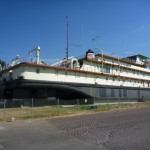 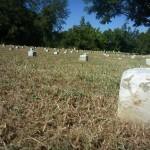 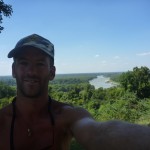 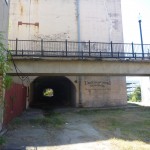 High on the bluffs above town lies the final resting place of the Civil War ironclad USS Cairo.  Sunk in the war, it was only recovered from deep in the water and mud in the 1960s.  The mud preserved most of the structure and a great many artifacts, and all are on display.   It must have been quite a tremendous sight to see such an ironclad steaming down the river, bristling with cannon.  Having the restoration before me allowed such visions to form in my mind with ease.  The ship is located within the Vicksburg National Military Cemetery, which I believe is the largest such in the nation.  The vast majority of the fallen are unknown, their graves marked with a simple austere bit of numbered marble.  It was a peaceful place, and solemn.  The symmetry of the weathered white stones affects the spirit.

I took my supper at the locally renowned Walnut Hills establishment and enjoyed the most delicious mashed potatoes I have ever eaten!