Conditions continue to be favorable for river travel.  With the tailwind my speed approaches 7 mph.  As I headed to shore to break for lunch I experienced another mechanical failure of my mirage drive peddle system.  This time, the bike chain which turns the cogs sheared in half, rendering the drive completely useless.  Such a failure could not have occurred at a better time, however, as I was only 18 miles from the nearest town, where I intended to remain for several days.  Thus waiting for the spare part to arrive will not delay me.  I paddled the rest of the day, in the traditional method of kayaking, and found it to be rather toilsome.  I have been much spoiled by my mirage drive technology! It allows for the freedom of my hands to eat, drink, etc… 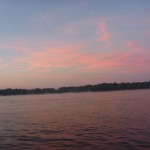 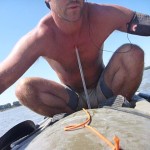 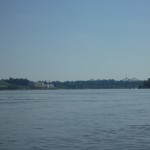 Vicksburg marks the end of the Delta region, large bluffs offering a commanding view of the bend in the river, which no doubt lent to its defensive authority during the Civil War.  I paddled up the Yazoo River diversion channel to reach the city–no small task now that I was going against the current.  At the municipal boat ramp I unpacked and sorted my gear, then sat on the dock backsplicing my frayed painter and talking with the tour boat operators, who spoke with a charming Louisiana drawl.

Also in the harbor were two 22-foot sailboats from Indiana.  The two sailors had left from the great lakes many months ago and were floating together down to the Gulf, then sailing around Florida, up the coast and up the Hudson and Erie Canal in the “Grand Loop.”  To save fuel they drift most of the day, meaning that I unexpectedly outdistance them by nearly double the miles each day.  Their journey is being prosecuted on the slimmest of funds, and they endeavor to pick up odd jobs in each town that they visit.  They were at the moment helping to move drywall.

I am content to be in a town after four days of uninterrupted travel, the longest such stretch yet.