Despite last night’s revelry I was able to rise early and be on the river shortly after 7 am.  It is nearly dark by 7 pm now, so I must make the most of my available daylight. 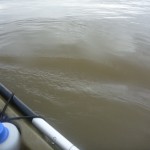 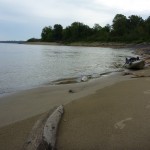 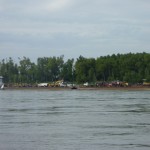 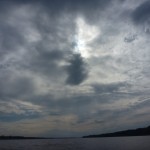 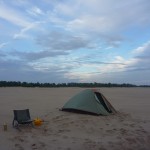 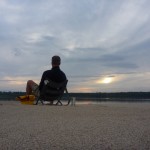 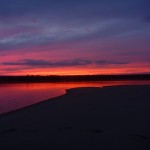 I was informed last night that an alligator was seen in town this week.  As I have an admittedly irrational fear of these creatures, I was greatly interested in this news.  I doubt, however, that they inhabit as swift a river as the Mississippi, at least for now.

Overcast, a bit rainy, very little wind, cooler temps—all in all a perfect day for river travel.  The lack of wind makes for a glass-like surface, and when no barge traffic is near, it is perfectly silent in the channel.

The clouds are spectacular today.  I saw a number of riverside vacation homes today.  They are the first I’ve seen in some time and are much more modest than those of the upper river.  It appeared as if some were vacant.

I am now camped on a large wide sandbar, sufficiently high enough to avoid the imminent rise in the river I should hope.  Upon making camp I was descended upon by a large cloud of mysterious gnats.  They were white and ashy, as though already dead.  Perhaps just hatched? They covered everything, especially the bright colors, but fortunately seemed to do no harm.  As quickly as they arrived, the swarm ended.