It was exceptionally hot today, upper 90s, with little breeze.  I made it to Helena before peak heat, but by the time I had lunch and refilled my water and provisions it had become so stifling that I found it difficult to think clearly!  I decided to remain in Helena for the remainder of the day, as it contains its fair share of history.  Most prominently, it is the home of KFFA, which broadcasts the longest running blues show on the radio: The King Biscuit Blues Hour.  I happened by right as the broadcast began, and was able to enjoy watching from in the studio. 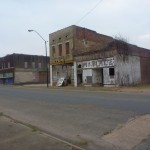 Helena has an impressive number of vacant and decrepit buildings, some in various ruins.  The bulk of downtown is in such condition, save main street, which has been given a mild renovation in an appeal for visitors.

I was treated very warmly by the local people and enjoyed a late night of dancing, drinking, and billiards at a small tavern downtown.  Minus a live blues band, it seemed to be a quintessential delta experience and I am grateful to have had it.