Traveled between the green velvety bluffs bordering the railroads for three or four hours in the morning, arriving at the city of La Crosse—so named for the net and ball games played by the Indians first observed there.  It possessed one of the larger downtown riverfronts I have seen, outside of the Twin Cities.  And it was reaffirming to see that the commercial shift away from river boats and railroads to highways and their attendant strip malls and sprawl seems to have not affected this section of the river. 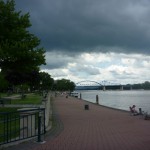 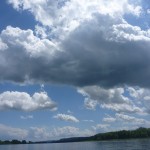 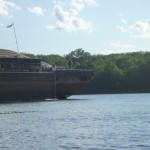 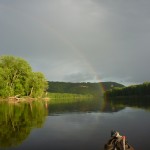 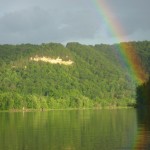 While enjoying refreshment in town, a dark thunderous cloud covered all, and the skies dumped forth an immense quantity of rain.  I reveled in my good fortune, having at just that moment entered the warmth and dryness of an eatery.  I was obliged to remain in town for well over an hour to let the storm pass.  However, back on the water, a new front moved in and I received a soaking.

Clumps of aquatic grass are strewn about the channel and frequently become entangled in my rudder or drive, slowing my speed by as much as ½ mph, which can amount to as much as 12% of my pace.  Thus I was frequently obliged to disengage the mechanisms from the hull and pull off the weeds.  This, combined with the rough water of the storm conspired to slow my pace below what I had hoped.  I was also delayed for some time at Lock 8, and have now just arrived at an eligible campsite at near dark.  No hot dinner for me tonight as I have not the inclination to cook or clean, but only to roll up peanut butter and jelly in a tortilla.  Having merely a few snacks for the last eight hours, I shant mind such a meager dinner at all.  Witnessed a double rainbow right before sunset, the end of it so near it seemed certain that I would reach it.