For the last several days impressive bluffs have appeared along the river.  They are a welcome change from the generally flat, geologically uninteresting terrain of northern Minnesota.  The trees are now full and a rich green carpet covers the tall bluffs; occasionally sandstone or limestone bedrock crags emerge from the top in a rusty or tan display.  These bluffs hem the river in, leaving but little room on either shore.  Every two hours or so I pass a small settlement, extending along the bank, but only three or four streets deep, due to the geography. 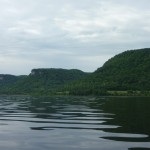 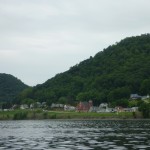 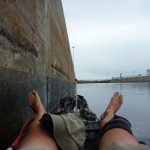 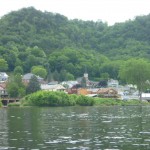 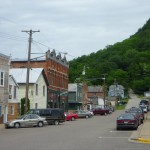 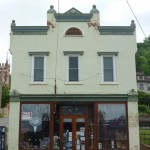 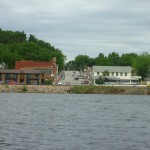 In one such town, Fountain City, I stopped for lunch and was treated with utmost graciousness by the café proprietor, Nan.  This café is quite old, retaining its tin ceiling, marble countertop, and wooden bar stools.  Like the other riverside hamlets in the region, Fountain City possessed a great many historic brick or stone buildings lining its quaint streets.

For the last several days, the railroad has followed the river along each bank and I am thus frequently witness to long chains of rumbling boxcars and the blowing of the locomotive’s whistle—sounds I find soothing.  The only substantial town I passed alongside was Winona, which possessed a handsome waterfront park.  Though a Saturday, all was unusually quiet—no one to be seen along the water and no cars moving in town, which lent an eerie aspect to the scene.  Met once again with my mother and the timing could not be more fortuitous—a cold hard rain began just as we joined, and did not let up for nearly four hours.  I, however, was dry and content and well fed within the shelter of her motor home, known as the Motherload.