The weather fairer today—just as hot and muggy, but with clouds and a small breeze to cool me.  Passed dramatic bluffs to the east, in the area of Alton.  Approached the massive confluence of the Mississippi and Missouri Rivers, with some trepidation.  Not only had I been warned by the lock masters and tug pilots encountered along the river of the dangerous clashing of the mighty currents, but I’ve recently had a dark dream wherein my vessel was capsized by a mighty onrush of river from the west.  I secured all my gear as tightly as I had in the first week of travel, and donned my life jacket for the first time in weeks.  Alas, even with both rivers above flood stage, I found the conditions no more hazardous than the last 100 miles. 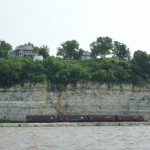 I relaxed again and settled in, ready to pass through the Chain of Rocks Canal.  This man-made corridor stretches some five to eight miles in a perfect line, linking St.  Louis Harbor with the river above the Chain of Rocks, thus allowing traffic to bypass this rough section of river.

While passing through Mel Price Lock (#26), I was informed that the harbor past Lock 27 was closed to all small craft by order of the Coast Guard, due to extreme high water and hazardous conditions.  Radio chatter between the lock and approaching tugs regarding my journey took on a grim tone, as I overheard words such as “suicidal” and “nuts.” I was eager to see what lay at the end of the canal.

First, however, I had to reach Lock 27, which proved to be more toilsome than I could have imagined.  There was only a moderate headwind, yet I found myself working vigorously just to make my standard pace.  It was so wearying that I was obliged to conclude that the current in the canal was flowing miraculously upstream! I was loath to stop peddling to test my theory scientifically, yet it seemed a certainty that I was somehow heading upstream.  Numerous barges and tugs choked the canal, and I used the radio frequently to arrange my safe passage.  The tug pilots seem to me a courteous and able lot, and were most accommodating.

As I neared Lock 27, I hailed them to request passage, and was informed that the harbor was indeed closed and as such they would not be allowing me through.  Again, I was treated to inquiries on my sanity, and concern for my well-being.  I made contact with the Coast Guard, hoping to arrange a pass, but met with the same treatment.  The conviction with which these river men warned me about the dangers of such a flooded river began to stir in me feelings of confusion.  Had I not just passed several hundred miles in similar conditions without incident? Was I perhaps fortunate to have made it so far? Or were they all over-reacting, assuming me to be a novice, unprepared for what lay ahead? There would be time later to ponder that and my next course of action.  The immediate concern was for a way off the river amidst such a sprawling industrial no-man’s land.

Fortunately I was able to hail a nearby marine fleeting service, and was granted permission to take out on their property.  I wandered about the docks, eventually finding a supervisory type, who was disinclined to allow me to roam about, but did ferry me to the main office.  It took some negotiating, but eventually I had audience with the president of the company.  As is often the case, the man at the top was all too willing to be of aid.  In fact, when fully informed on my situation, he so much as forbade me to return to my boat.  Apparently currents such as these have been known to flip even tugs.  He was adamant that I not continue until conditions mellowed.

Again, I was torn between the seasoned appraisal of a wise river man, and my own experience and observations of the river.  The combined weight of this fellow and the lockmasters and pilots encountered over the last few days prevailed.  A worker was detached to bring my boat up from the water to be stored at their facility.  I contacted my mother, who was meeting me in St. Louis anyway, and made my boat and equipment secure.  I must now contemplate my options, which seem to me at this point:

In any event, I was looking forward to several days of exploration and enjoyment in St.  Louis, so I do not feel pressed to make a decision at this time.