A very late start today–finishing the repair to my fins, doing laundry, and visiting the historic Ft. Madison.  A very early establishment, perhaps the first on the upper Mississippi, after the Louisiana Purchase.  Its aim was to make a safe location from which to do trade with the Indians, principally Sauk and Fox.  It contained 60 to 80 men, contained in four buildings, a wooden stockade, and three defensive towers.  During the war of 1812 the Indians, led by the renowned Blackhawk, sided with the British and laid siege to this fort.  After some time, the inhabitants were compelled to flee the fort under cover of night, burning it to the ground as they went. 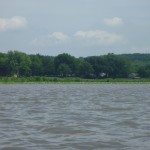 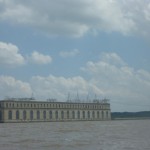 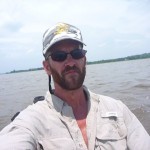 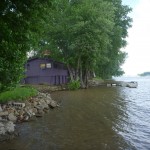 The wind was impressive today, keeping me cool but throwing forth a gauntlet of four-foot waves across my bow without pause.  With the flood conditions, I still made acceptable time.  Crossed the confluence of the Des Moines River and am now in Missouri, state of my grandfather’s birth, and of my grandmother’s family origins.  Her grandfather was a judge here I believe.  Though it seems too early in my voyage, I am now in the “South”, having crossed the Mason-Dixon Line.