Made way early, shortly at 6 am, as I was informed that foul weather lay in store for the latter part of the day.  The heavy rains, 2 to 3 times the monthly average at this point, have swollen the river.  She appears to be several feet higher than usual, large swaths of debris form foamy striations across the surface, containing sticks, branches, and sometimes giant logs.  The surface is a bit seething, as though it can’t determine the best course to take, and whorls or eddies frequently push me off course.  I do, however, gain the benefit of increased speed thanks to the current, and I believe I have pushed and possibly topped 6 mph at times.  It is a consolation for the repeated soakings. 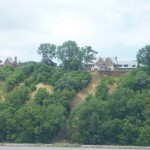 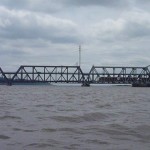 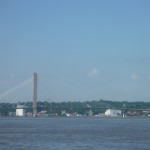 On this stretch of river are a great many duck blinds, perched on the water like some kind of bunker made of sticks.  Freight trains were a near hourly sight in the MN/WI region, yet lately I cannot remember the last time I saw one, though the tracks continue to border the river.  As I approached Burlington, which lends its name to the west bank’s line—Burlington Northern Santa Fe—I at last spied two trains leaving town, one of which crossed the wooden bridge as I went below.  (No—I now recall that was in Ft.  Madison.)

Burlington was at one time the territorial capital of Iowa for several years.  It has of late, I was informed by a friendly but slightly embittered local, undergone a substantial demographic shift and population decline.  They were having a series of concerts on the waterfront this week, but I found the parking lot in which the event was staged to appear cramped and less than scenic, from my perspective on the water.

Six miles up from Ft.  Madison, I once again suffered the disablement of a fin, this time due to a very small bolt and pin that came loose and sank.  I fashioned a remedy of cordage and hope to find a permanent fix in town.

Ended the day in Nauvoo, IL, site of the Mormons’ attempt at an idyllic theocracy.  It was, in its prime, the tenth largest city in America, before the death of Joseph Smith and the final exodus of the those peoples to the Utah territory.  The remaining buildings of the original town have been lovingly restored or maintained and the broad grassy fields, tall trees, and spotless grooming of the place was very appealing.  It was very spacious and seemed quite untouched since those days so long past.  Unable to find reasonable accommodation in Nauvoo, I returned by auto to Ft.  Madison, where I found lodging—that I might shower and do laundry and enjoy an actual bed.