Engaged with the local inhabitants of Alexandria last night in a Euchre tournament, held in a smoke-filled ramshackle purple tavern right on the water.  I did not perform well. 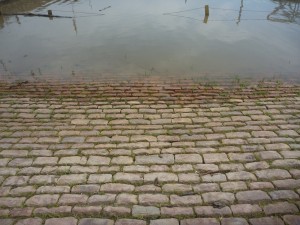 This establishment, though 8 to 10 feet off the ground, was inundated with floodwater in ’93, and the waters reached halfway up the wall.  That would put them 12 to 15 feet above the ground.  It is for this reason, I suppose, that the expensive estates along the river in Minnesota have given way to rather Spartan 600 sq.  ft.  cabins raised on 15’ stilts in Missouri.  At tournament’s end, the night sky was in a near-continual state of illumination from lightning flashing all about.  It was an ominous and eerie spectacle, for no thunder could be heard and no bolts made out, just continuous flashes, which briefly made visible enormous deeply purple clouds, thick and rolling and menacing.  It rained hard throughout the night.

Determined to beat the excessive heat and humidity, or perhaps the 20 mph winds of the day before, I awoke at 4:30 and made way shortly thereafter.  I was successful in my aims and was comfortable during the morning.  The rains again sped me along.  Though I scarcely notice when amidst the channel, the incredible increase in speed becomes apparent as I near the shore.

I stopped in Quincy before noon.  This town was once a port of entry into the US, possessing a large manufacturing base and railroad hubs, and as such a great concentration of wealth.  This was on display (at least the remnants of it) in a 40-block square of finely preserved estate and homes.  Most were of brick, some stone, some wood; Tudors, Victorian, Queen Anne, some French styles.  All with an attentiveness to ornamentation and detail rarely seen since that period of 1860’s to 1890’s.  Most seemed to be three-story, often with large elaborate garages meant to house carriages and horses, brick driveways leading up, gently rutted from a century of use.  After taking in the sights I returned to the river at 3, and a thick cover of clouds and winds made my journey to Hannibal blessedly cool.  I intend to explore the boyhood home of Mark Twain tomorrow.