Made excellent progress this morning, nearly 5 mph.  The convergence of the Prairie River has nearly doubled the flow of water, making for a deeper channel and more rapid current.  There still is the occasional hazard in the water.  It takes a keen eye to differentiate between underwater obstacles, eddies, and wind disturbances, and though my aptitude is improving I still fall prey to unseen submerged logs.  These are very injurious to my mirage drive, and I found midday that it was quite damaged.  It is however a resilient and well-designed machine and I give great credit to the engineers, for I was able to quickly realign it and repair it.  The numerous collisions have taken their toll however, and the blades are rather warped and show serious wear.  It continues to perform admirably, and I look forward to when the channel is finally free of obstruction. 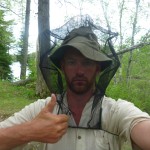 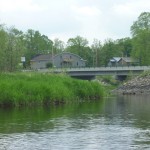 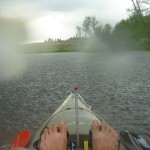 It rained most violently and gusted the same, from 4:30 to 6:00 this morning, but I remained dry and snug in my special hammock.  The day was fair until 3:30 though, and I enjoyed the cooler temperatures and marbled sky.

After leaving the town of Jacobsen, the torrents began.  Such a volume of rain poured forth that not a single inch of the river was level.  It appeared as if I were gliding across a boiling morass.  I and all my equipment were thoroughly drenched in but a moment, though the air remained warm.  I was given a blessed reprieve as I arrived at my camp.  The clouds opening to let in warm rays and a rainbow appeared over the river as I rounded the last bend.  I was thus able to unload the kayak and pitch my shelter in a moment of calm, if damp, peace.  Thunder can be heard to the south; I expect further storms this night.