Upon rising I was served a delicious breakfast of fried pike by my genial neighbors.  They also furnished me with a new fishing rod and reel at a reasonable cost, my original one having been lost somewhere in the rapids of the first day.

I decided to visit a local forest history interpretive center and was given a ride there by the gentleman manning the Army Corps of Engineers office.  The north woods of Minnesota contained at one time vast amounts of timber, which was quickly exhausted during the end of the 19th century and beginning of the 20th.  Prized especially was the Eastern White Pine, as it makes exceptional lumber.  In the desire to populate and press farther into the frontier, the demand for material was insatiable.  Minnesota, in this region, developed a substantial logging and milling industry which continues today.  There remains, however, merely 1% of the old growth forests in the state.  It was truly inspiring to learn about the lives of the lumberjacks, those rugged and tireless men who labored in the snow, and gathered in the dining hall, and hung their sodden garments next to the stove before retiring, two to a bunk, for one or two dollars a day. 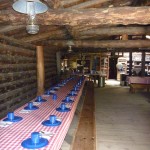 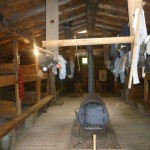 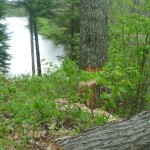 I was without a ride back to the dam, so I walked the four miles instead, partially along the railroad tracks.  A fearsome wind had developed, and when I put my kayak in the water downstream of the Blandin Co. Paper Mill I battled intensely strong headwinds and waves, which I was not aware could exist on such a small river.  The water was lifted from the peaks of the waves and cast into my face.  At first the river was shallow and progress exceedingly slow for 30 to 40 minutes.  But upon reaching deeper water I found my craft most suited to slicing through the wind and waves and was able to make an impressive speed in the face of the tempest.

Thankfully it cleared and I was left with gorgeous sky and a calm river, which ran through lush grassy embankments, stands of Oak, Maple, Red and Jack Pine, some farms, and a few fine dwellings.  I encountered five fishing boats on the river.  Presently, I am situated on a small point overlooking the river.  The sky has grown grey and still and damp and I await what will surely be a thunderstorm.  I pitched my hammock so as to avoid the worst of the wind, only to realize I was adjacent a tree which has been half chewed through by an industrious beaver.  Needless to say I have relocated to an area of juvenile Silver Maple, which, should one fall upon me, will hopefully be less injurious.