Began the day at a healthy clip.  After some experimentation with my seating arrangement I believe I have arrived at an agreeable configuration, whereby the bulk of the work is done by my legs rather than my back.  This allowed me to progress steadily at 3.5 to 4 mph, pain-free, for as long as my endurance would last.  Arrived at Schoolcraft Park (named after the man who located the source of the river) after 3.5 hours of paddling, and was relieved to be back on charted ground, as I had now crossed into a new region for which I carried a map. 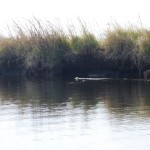 Beaver on the Move 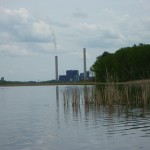 Saw several otter this morning, as well as a beaver at last, which delighted me.  Carried on from the park at a healthy clip, passing assorted riverfront homes ranging from palatial, to mobile home, to simple one-room shacks likely used for fishing excursions.  The river continues to be rimmed by the brown dry grass of the marsh, which was in turn surrounded by hardwood and some light pine.  The channel was deep and wide and made for good progress.

In the region of Blackwater Lake, this all came to an end and I found myself at a loss for direction.  The usually reliable submerged grasses swayed listlessly and at random, and what appeared on the map as a lake in fact was a dense bog of thickets and choked with weeds and grasses.  I was reduced to a painfully slow pace—each stroke of the paddle being draped in several pounds of sodden reeds.  It was a maddening hour spent languishing in uncertainty, when at last I came upon a massive industrial structure–the city power plant.  I beached the kayak and scrambled up the embankment and into the complex and received orientation from a worker.

Thus armed I continued on with my slogging for another mile until regaining the channel and the hamlet of Cohassett, where I paused for refreshment at a tavern.  Forty minutes of travel further brought me to yet another dam where, having not the energy to attempt a portage late in the day, I intend to camp.  It is less than scenic, being flanked by the dam and a highway, but such is my fatigue that I care not.