Awoke early and prepared breakfast before dawn.  A great many wood ticks are present in these parts, and any foray into the woods always results in a handful of the vile creatures clinging about my legs.

I completed the crossing of the lake before the winds picked up and was yet again faced with a portage around the dam at the eastern end.  This time it entailed an ascent of a rather steep 15’ grassy bank, and was accomplished with ropes and leverage.  The re-entry to the river lay several hundred yards away, and by lashing the bow of the kayak to my backpack I was able to transport it there with the aid of my shoulders, rather than arms. 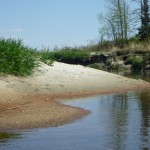 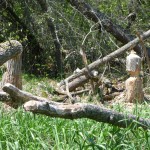 The river immediately entered Little Lake Winnibigoshish, which was so shallow and sandy that I was compelled to pull the boat through the sand bars by hand.  A great many snail shells lined the bottom of the lake, such that one could obtain eight or nine in a single handful.  These shells would appear frequently over the next 10 miles, whenever the river bottom was sandy.  Also observed with great frequency were some form of mollusk whose iridescent shells would glimmer from below.

Sadly, the next section of river was all too often shallow and sandy, to the point of rendering both rudder and drive useless.  Reduced to paddling without acceptable steering abilities into a strong headwind left me depleted and in a disagreeable mood after two hours and perhaps only four miles gained.  Alas, I was unable to judge my progress with accuracy, my map having been carried off on the lake without my knowledge.  Fortunately, for the first time, the river channel was unmistakable today and the map was not needed to find my course.

On this day I observed many bald eagles, too many to count.  Another noteworthy encounter was with a great blue heron, which followed ahead of me for several bends in the river.  Also, I came upon a mother duck and seven ducklings that cheeped madly in a terror as I approached.  The mother abandoned them in a panic and paddled ahead of me for a great distance, never taking wing to return to her young.  Such behavior in a mother seems uncharacteristic—perhaps she was trying to lead me away from them, or perhaps ducks are cowardly creatures.

After slogging through the shallows I at last came to the confluence with Leech Lake River, whereupon the depth increased greatly, to my satisfaction, and the river changed from its dark blue-green hue to that of deep brown.  Could it be that the famous “Big Muddy” initially derives its color from this stream? Befitting of the river’s new iconic aspect, I immediately observed several catfish lurking on the bottom.  I have now found a most agreeable campsite along the river and will pass the remaining hours in the shade, as it is quite hot today and my hands and feet are red and glowing with warmth.  Nine hours in transit, hoping to re-enter mapped territory tomorrow.