Completed the crossing of Cass Lake early enough to avoid high winds, which make movement cumbersome.  Having fresh supplies on hand, I enjoyed a feast of eggs scrambled in the rendered beef marrow from last night’s supper.

A great many pelicans waited at the dam where the river exits the lake, and they took flight as I approached, in a noisome affair.  Portaging my kayak past the dam without the aid of my friend was an awkward and unsightly affair as well!  The mechanics of the process will no doubt become routine, but until that time I will surely make for a humorous diversion for any who happen to see me. 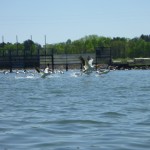 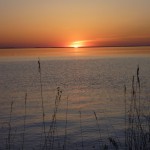 The river was uneventful for the next 10 miles, generally wooded, moving along nicely, and I saw no one.  Stopped for rest at Smiling Jack Camp and was treated to a fine lunch of walnut burgers provided by fellow travelers on their way to Grand Rapids.  Also partook of their cold beer and was greatly refreshed for it, and thankful.

Lake Winnebigoshish was dammed in 1881, raising the level eight feet and thus depriving the indigenous Ojibway from a sizeable portion of their villages and crops.  It is now 10 miles across and I could scarcely make out the far shore from my vantage at the river’s entry.  I initially hugged the southern coastline for fear of rough water in the high winds, but soon abandoned this course when it became clear that my kayak was a worthy vessel for rolling waves.  I was also eager to spend as little time crossing this vast body of water.  It was a laborious process, heading straight into the wind and weathering the numerous waves that broke across my bow.  After two hours of hard and uninterrupted strokes I was close enough to the eastern shore to begin searching for a suitable camp.  Very relieved to have that trial behind me, as my back was given to great discomfort.

One Response to May 19, 2010–Lake Winnebigoshish