After 90 minutes paddling in the morning, we arrived in the town of Bemidji, where my worthy companion John rendezvoused with his wife Debrra.  They bestowed on me one final act of kindness and took me to an outfitter, where I replaced the paddle that had broken the day prior, as well as a marketplace where I obtained victuals sufficient for five days of travel.  I then installed the mirage drive in the kayak, transforming it from an awkward and laden vessel into a fleet and nimble one.

Alas, the steering mechanism failed me midway across Lake Bemidji, no doubt as a result of the damage sustained during shipment from Los Angeles to Minnesota.  Thus I was forced to disembark at the earliest opportunity and muck about in waist-deep water making repairs, for which I lost one hour.  Fortunately, the adjustments proved sound and I was no longer troubled the rest of the day. 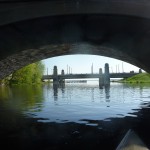 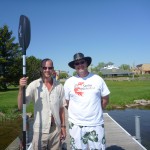 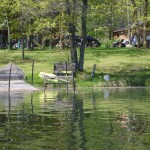 Star Island in the Distance

For several miles the river wound alongside private docks and riverfront estates nestled amongst timber.  However, the river’s depth quickly shrunk and rendered the mirage drive useless.  A brief stretch of shallow rapids, but very rapidly flowing, compelled me to disembark and wade the kayak through along the bank for fear of certain damage to the drive.  This device is too crucial to completion of this voyage, and I cannot suffer it to be jeopardized in the slightest.  Thankfully, the river then dumped into a series of lakes which allowed me full use of the drive, and likely doubled, or nearly so, my rate of travel.  I now camp on Star Island, in the center of Lake Cass.  There is a lake in the center of this island, called Wendigo, which I should like to see.  Yet the fatigue and strain caused by today’s lengthy journey will surely dissuade me from extraneous paddling.