Enjoyed one of the best night’s sleep of this journey—that is, one with the fewest number of awakenings.  Again, in the mid 40s during the night, and I found myself shivering a bit as I broke camp.  With but 20 minutes of paddling however, I was ready to shed my long underwear, and the day proved to be quite warm as there was little breeze. 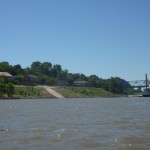 Estates Looking Down from Natchez

Natchez offered one of the more inviting vistas upon approach in recent memory.  High on the bluffs overlooking the river stood a row of stately homes, and wending steeply down from them was a road to the water’s edge.  I landed at the wharf area, known as Natchez Under the Hill, which in its heyday was a bustling nexus of gambling, drinking, brothels, barbers and hotels—all the things a riverman might dream about whilst under underway.  Though in its time the most notorious and infamous den of debauchery along the river, it is now reduced to a mere handful of operating establishments, and I gratefully grabbed a stool at the bar—the oldest on the river I’m told.

Natchez once boasted the most millionaires per capita in the country.  Despite these fortunes having been amassed on the backs of slave labor in the cotton fields, its sympathies lay with the Union and it readily capitulated to Grant’s army without a fight.  Thus, its mansions remain intact and it is the focus of many a so-called “pilgrimage” of those keen on exploring these opulent relics.  I find myself feeling unreasonably fatigued, for such a light day of travel, to the extent that I cannot muster the enthusiasm for a detailed exploration of the town.  I shall obtain a room for the night and retire early.