Another excellent day of river travel.  The terrain has flattened out considerably, with no bluffs to break the monotony of the skyline.  It’s amazing such a small absence can so greatly add to mental boredom.  The river has been dramatically devoid of wildlife, so when a creature is spotted, I feel a sense of satisfaction.  Saw a large turtle fling itself to safety off a 10 foot embankment on my approach.  Also a lone bald eagle, which I haven’t seen in a great time. 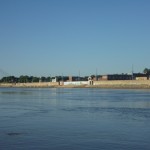 Stopped for lunch on a sandy embankment and found a small open motorboat wedged in the trees and rocks.  It no doubt broke loose during the flood and found its way to this final resting place.  While by no means a fine craft, I’m sure its owner misses it dearly, yet has no means of alerting him to its location.

I attempted to shave a mile or two off my day by traveling through a small chute around a towhead.  It did save me some time, and was also cause for some excitement.  A wing dam spanned the entire chute, causing a large hump in the water and considerable turbulence beyond it.  As I crested the hump and descended into the frothy chaotic water, I experienced a rush of adrenaline not felt since Sauk Rapids, long ago.

North of Cairo several fires burned beyond the trees.  I’m not sure their purpose, but the smoke in the air gave that section an eerie aspect, and all was tinted orange from the smoky air above.

I am presently three miles upstream of the Ohio River, on a sandbar.  I had intended to camp on a fine sandy bank a mile earlier, but as I beached I could hear reports of pistols, so I quickly pressed further, knowing I would be rather uneasy camped in the vicinity of mysterious gun play.  I am curious how the nature of the river will be altered by the massive influx of the Ohio.  I have but one foot of elevation between my camp and the river, and hope dearly that it will not rise and ruin my night’s sleep.  I have tethered my boat to the tent, in a form of an early warning device.