The day was filled with exuberance in anticipation of my arrival in Memphis, and was heightened by the skyline’s appearance on the horizon.  A strong headwind picked up, making the last two hours of approach very laborious and extra interminable in my state of eagerness to reach the great city. 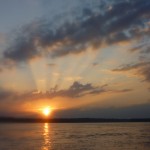 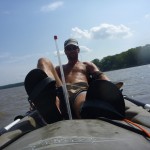 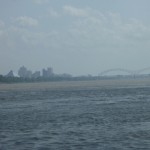 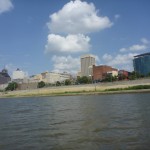 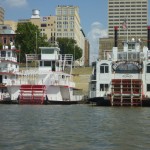 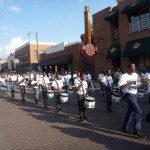 I passed under the I-40 bridge and then headed up into the harbor opposite Mud Island, where I arranged safekeeping for my craft at the local yacht club, whose proprietor was incredibly friendly and helpful.  On the dock I met a local tug pilot, and enjoyed spending a bit of time having a beer and inquiring of his trade.  I pass so many of these characters each day and have a good deal of curiosity as to the details of their business, on which this captain was all too willing to inform me.

I then traveled across the pedestrian bridge into the downtown and made my way to Beale Street, a historic and notoriously raucous stretch of blues clubs and juke joints.  Of course its current iteration is somewhat of a tourist-minded re-creation of the storied past when it was considered the Harlem of the South.  Nevertheless, I enjoyed the music pouring forth from every open door and enjoyed the best hot wings I’ve ever had, along with a pint purchased for me by Scottish visitors who held my journey in some esteem.

I have made arrangements to board with some college students living in Mid Town, which would save me a considerable sum in lodging as well a provide an opportunity to experience the city with a local guide.  To reach their dwelling I rode the Madison St.  trolley, which appears to be unchanged in 60 years, save new paint and varnish.  It is a handsome method of travel, clacking pleasantly, the all-wood interior gleaming in the sunset.  It was a charming introduction to the city.   My host is acquainted with a guitar player, and we will now attend a performance at a nearby Irish pub.