Perhaps as recompense for yesterday’s inclement weather, I received clear blue skies and warm sun today, and a strong wind at my back to cool and propel me forward.  At times the gusts reached 30 mph, which became a difficulty when I found myself tacking across them, as any spray would be immediately flung several feet through the air into my face and body. 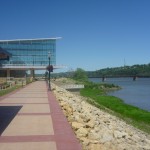 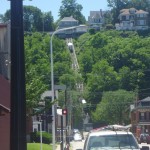 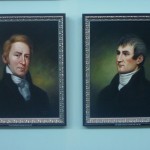 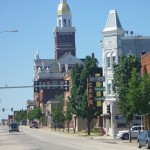 I paused after 3 hours at a remote, private boat landing and sat in the shade taking my lunch and doing some stretches.  Before long I was at Lock 11 and found myself last in line behind 2 tows, who also needed to be gassed up.  I was resigned to spending several hours sitting on the rocks in the heavy winds when an engineer approached with a cart and trailer and offered to help portage me around.  I warned him of the cumbersome nature and excessive weight of my craft, but he insisted and pressed a fellow engineer into my service.  These two able and brawny fellows hoisted my boat up through the rocks and onto the trailer in no time.  I was grateful for their cheerful willingness to help and the efficient manner in which they completed the task.  They spared me another wasted afternoon!

Beyond the lock lay Dubuque, IA, a city of about 58,000, with an impressive waterfront and harbor.  This harbor was originally created to serve as a place to harvest great quantities of ice, which was sawed out of the frozen harbor, floated to a vendor, packed in sawdust and transported to kitchens around the area.  This harbor now boasts several riverboat casinos and an extensive Mississippi River history museum, which I toured.  The floor of the museum featured a scale map of the waterway, and it was fun and satisfying to follow my progress so far.

I found the downtown to be lacking the energy and activity of La Crosse, and the historic charm of the smaller river towns through which I have passed (notably MacGregor).  It did have many fine brick buildings and I’m sure much more to offer a visitor such as I but alas I was eager to eke a few more miles out of the day.

Continued for three more hours during my favorite time for it (early evening).  As I began to search the shore for an eligible place to make camp, I happened upon a lone fisherman in his boat, who informed me that a sandy beach lay but a mile farther.  This is where I am now camped, some 17 miles south of Dubuque, in the vicinity of a place on the map identified as “Smiths”.