Ah what a relief to be back on the water making progress downstream!  My parts arrived, delivered overnight to a confectionary in the village of East Davenport; owned by four generations of Italians; they graciously agreed to let me give their address to the parts vendor.  The repairs were easily made, and my craft made new in a matter of minutes.  While adjusting my seat, I discovered the crushed dead body of some form of water snake, who had obviously crawled up under the seat cushion to stay warm and had been smashed dead when I sat down some days prior.  The corpse smelled most foul and in my haste to be rid of it, I did not take note of its markings; a pity as I would like to know if it was venomous. 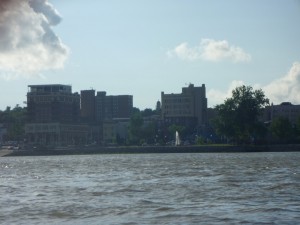 A mere mile downriver was Lock and Dam 15, adjacent to the Rock Island Arsenal.  This island, nearly 1,000 acres, is the army’s largest arsenal and the site of a fort built in 1816, when the Mississippi River lay at the farthest reaches of the frontier.  I was blessed with a speedy lock-through.  Several miles later, a ferocious storm blew in, the strongest I have yet felt, with impressive gusts of wind raking the deluge across the surface of the river, and great white clouds obscuring all but 30 yards around me.  This thankfully subsided after but 10 or 20 minutes.  The rest of the day was fair, and I passed several small hamlets, several campgrounds, and several mills and power plants.

At Lock 16, I was informed that I must wait at least 90 minutes, so I decided to pull the kayak up an embankment onto a gravel road and portage around the dam.  While passing a barbed wire fence I spied a bird in a state of distress—his leg was caught up in some thread, which in turn had wrapped about the wire.  The leg was broken and held on with but a little flesh and he flapped about wildly.  I caught him and slowly extracted the mangled foot, then released him, whereupon he flew off in a panic.  I felt a great sense of satisfaction, perhaps atoning for the death of the snake.  There is something extra pitiful about a bird that is ensnared and cannot take wing.  While I may not have saved his life, at least he may now choose the place of his expiration, in dignity.

Passed Muscatine around 7 pm, and its small quaint waterfront area with a tall spouting fountain, and followed a slough on the south bank to the small campground near Blanchard Island.