A great many beaver populate this section of the river.  Also seen in many numbers were the whitetail deer: thirteen doe in total.  Traveled by the site of Old Crow Wing, once a settlement along the river, and a prosperous stop along the Red River Ox Cart Trail.  Railroads and steamboats spelled the end of this path and now all that remains of the town is a lone building.  Also gone is Fort Gaines, erected as a buffer between the relocated Winnebagos and the Ojibwe and Dakota peoples. 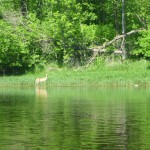 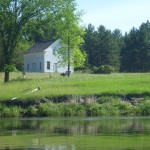 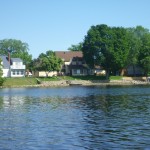 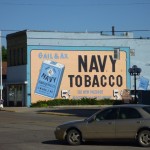 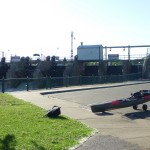 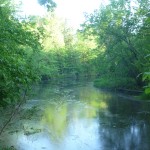 The river later passed through a maze of islands, all wooded and very inviting.  This route was once completely clear, but logs floated downstream and occasionally became caught on rocks or boulders midstream, whereupon further debris would cling, until enough soil accumulated to support large tree growth.  It was in this region that, in 1893, the largest logjam ever recorded formed: some 6.5 miles long and 30 feet deep, taking 150 men, 5 teams of horses and a steam engine to break up over the course of six months.  Upon close inspection, old logs can still be seen protruding from the base of some of the islands.

The water exceedingly shallow in many areas, causing me to collide with rocks.  My special paddle-operated drive was rendered inoperable due to the damage.  After tinkering on the riverbank I was able to recover the use of one of my fins, which allowed me to continue, albeit at a greatly reduced rate.  It also now causes me to list side to side with each stroke, which is disturbing to the senses initially but eventually acclimated to.  In the region of St. Paul I will look to engage the services of one who can repair or replace my damaged parts, as I was quite accustomed to gliding effortlessly across the water.