Very chilly last night, in the 40s, for which I was not prepared, having left my woolens in the kayak and consequently slept fitfully.  When I rose to make coffee and fry the homemade potato sausage purchased in Aitkin, a heavy mist was flowing along the river’s surface.  Became a fine warm day, with a perfect cool breeze, riverbanks now predominantly lined with elm and maple. 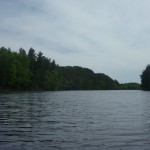 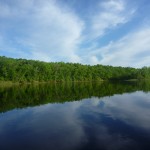 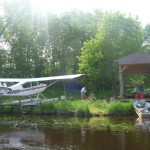 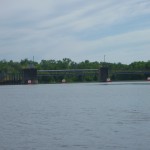 Having such an early start I experienced a glassy surface to the river and, heretofore having known only windy conditions, I found myself able to maintain an excellent pace with minimal effort.  As if making a gift or offering, a bald eagle soared ahead and dropped a single feather in my path.  It twirled to the surface and I scooped it up as I glided by.  I also passed several families of Canadian geese, the ganders standing alert as the mothers led their broods of downy brown chicks up the embankment to safety.

Throughout the day the river gradually widened, becoming nearly double the width of yesterday.  It now feels like a proper river; it is now no longer possible to call from shore to shore with ease, as I did last night when asking and receiving permission to camp.

The shoreline very sparsely populated today; when it was, generally with nice homes rather than farms.  It would appear that after fishing, lawn mowing would be a native Minnesotan’s favorite hobby.  The climate lends itself to rich grasses.  It is indeed very similar to my home state of Oregon, except with respect to geology.  Large rocks are seldom seen, to the point that any rock larger than a foot or two across is a rarity and worth remarking upon.  I daresay the only exposed bedrock yet seen existed for a mere 60 yards of river near Grand Rapids.

Today is the fist time in some time that I’ve seen another boat on the river—a fisherman outside of Brainerd.  The dam in Brainerd required a 200-yard portage, which I accomplished speedily thanks to a paved path and my increasing aptitude for such things.  A dead beaver lay floating in the foul and foamy water downstream from the dam.