The violent thunderstorm of last night had spent itself and today was one of the most agreeable climates of the voyage.  As I pushed away from shore, I was pleased to see that my comfort and ease within the kayak was not diminished by time spent away, and that she glided across the calm canal as bonnily as ever. 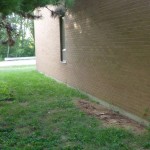 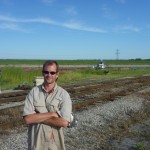 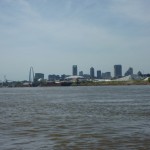 St Louis on the Horizon 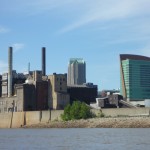 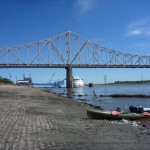 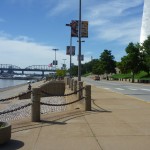 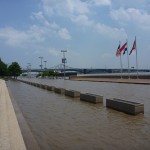 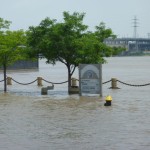 As if by design, the final lock on the river was open and awaiting my arrival.  I exchanged pleasantries with the lockmaster, pleased to be free of the often lengthy ritual of passing through, yet sad to no longer have a regularly occurring distraction and periodic milestone by which to gauge my progress.

The canal soon merged with the channel, and the skyline and arch of St. Louis loomed ahead.  The river below the locks, during normal conditions, seemed equal to the river above during flood stage.  This suggests to me that I made the right choice in avoiding this region until flooding subsided.  Perhaps it was well that the flooding did occur however, for it allowed me to gradually become accustomed to the swift water, debris, and roiling surfaces.  Had all been calm, I would have perhaps felt shock at the speed of the free-flowing current below the dams.

Passing through the harbor was unsettling, for the sheer volume of docked barges, plodding tugs, and industrial riverside mayhem obscured the approaching river traffic.  I was twice startled to find a tug with 18-24 barges steaming down on me, its movement camouflaged against a backdrop of steel and rust.  It was during the second of these flights from an oncoming tug that I felt a familiar jerking of the motion of my pedals.  Upon close inspection, I could clearly see that the teeth on the rotating cog that operates the flippers were wearing off.  A similar malady affected my craft above St. Paul, but I had thought the problem solved.  I was particularly perturbed, as I had inspected the teeth for wear two days ago, and found none.  While my propulsion was still 100% functional, I knew failure was just a matter of time.  It might very well last 100, or 300 miles, however the failure would certainly occur.  Likely brought about by vigorous, rapid strokes, the likes of which would only be employed in an evasive maneuver, or when straining against the current when heading upstream.  In other words, it would break when I most needed it.

This was cause for some despondence as I was merely two hours into my day, the first in two months.  Yet given the rapidity of the current and the volume of barge traffic, I was unwilling to delay a solution.  I stopped at a dilapidated marina some 20 miles south of St. Louis and arranged for spare parts to be delivered.  I have taken a room nearby to await delivery tomorrow.  With any luck I can make the repairs quickly, leaving enough daylight for 15 to 20 miles.

More on the river: Roughly nine miles past St.  Louis, the river returned to itself—sandy banks, wooded shores, little in the way of traffic or docked barges.  It was a welcome relief from the harbor.  The water is very warm, and seething oddly, as though no current exists at all.  It pushes my bow about, and occasionally seems to suck down a bit.  Roiling waves appear from time to time.  I cannot decide if it was always so, yet time away has dulled my synergy with it; or if its nature has changed below the locks.  The mark of industry is heavily upon it in the form of pungent scents—petroleum, musty grain, rock dust.  The banks are dense with small willow trees.

Despite the mechanical setback, today left me with a feeling of success.  I was without pain, discomfort, fatigue, or atrophy; the currents were swift enough to make good time, yet manageable; the weather fine, my spirits high.