The 2010 Mississippi River Expedition began in a most auspicious manner, the 40 degree rain having miraculously ceased the day before departure.  Perfect blue sky and billowy clouds would be our canopy, and the air was in the 70s.
I arrived at lake Itasca at 7am, with my worthy companion and local guide John.  Today marks the beginning of Minnesota fishing season and the lot was brimming with the vehicles of fishermen, as was the pristine lake.  Once in the lake, we immediately struck out to the eastern end, where the Mississippi trickles over a small levee of rocks and begins its 2,500-mile journey to the Gulf.
A mere 12 feet wide, it lazily traveled through marshy wetlands and a thick, albeit young, forest.  I found my kayak ill-suited to such environments and was made to suffer constant veering this way and that.  In my inexperience it took great concentration and exertion to force my will upon its trajectory.  Twenty minutes into the voyage we were channeled swiftly through a culvert, plummeting steeply into a rushing pool below, where upon I was spun sideways and nearly capsized. 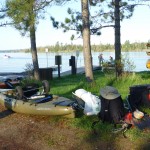 Putting in at Lake Itasca 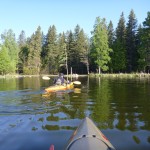 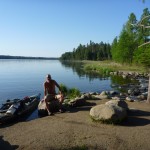 It’s all downhill from here–literally!

One could practically jump across! 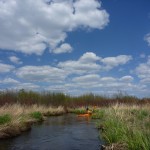 John leads the way through the meandering stream 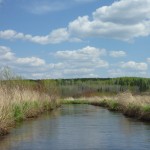 Colors of the River 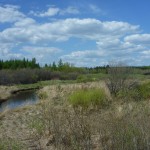 
The next several miles were uneventful maneuvering, and full of wildlife.  In addition to the numerous beaver dams we were obliged to pass over, we spied a hulking mound of a muskrat lodge.  Also seen were bald eagles, an otter, painted turtles, trumpeter swans, Canadian geese, osprey, hawks, blue heron and a brood of ducklings.
Further along the river we encountered a four-mile stretch of rapids, which consumed the majority of our mental and physical resources.  Our craft were unwieldy in such tight confines, and frequently scraped along the rocks with horrible sounds.  Again, spun sideways, I nearly pitched over, and John indeed capsized, soaking his entire stores.  We paused by a roadside to dry his belongings and recuperate from the trying rapids.
The remainder of the day’s travel was through marshes.  It was a splendid sight.  The stream framed by brown grasses, and beyond them every imaginable shade of green in the forests, which were just now coaxing open their buds for summer’s warmth.  Red dogwoods growing creek-side completed the color palette.  It was indeed a glorious day, and though my body is greatly fatigued and my mind weary, I can’t help but feel a great sense of well being and contentment.